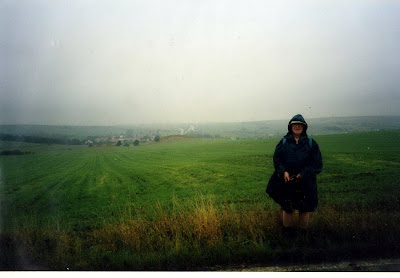 This was our first trip with Midas Battlefield Tours. For a short tour of only four days we managed to fit a great deal in.

Again the weather was pretty dismal. However we regularly do hill walking in UK, so we are well used to walking in the rain. Mind in UK the mud was never quite as bad as it turned out to be at Austerlitz.

It was raining as we drove to Heathrow on 3 September 1998 to catch the flight to Vienna, and it continued to rain on and off for the whole holiday.

The group was surprisingly cheerful, and remained so in pretty challenging conditions.

Despite the weather we stuck to the programme, and walked large sections of the battlefield. Austerlitz is an easy battlefield to explore. Modern roads follow those to be found on period maps and battle diagrams.

The area was used as a Russian military training area during the Cold War, and no doubt that helped to keep it under developed. The Pratzen now has a huge monument, but provides an excellent viewpoint of the battlefield.

Another good viewpoint is Zuran Hill, the site of Napoleons command post during the early stages of the battle. The nearby Santon Hill is less good, as it overlooks an area not much fought over during the battle.

Telnitz and Sokolnitz are both well worth a visit, and unchanged enough to be able to follow the detailed descriptions of the battle readily available.

My particular favourite was The Post House. This was used by both sides as a battlefield headquarters, and is the centre of the reenactments which take place every year. It retains much of its original flavour, but has a very modern motel (with underground garage) added on.

Brunn and Austerlitz, plus an afternoon at the Vienna military museum, were an added bonus.

We enjoyed our visit so much, that it inspired us to return a few years later for a much more detailed walking holiday.

Posted by paul leniston at 2:11 PM

Email ThisBlogThis!Share to TwitterShare to FacebookShare to Pinterest
Labels: 10 - Summary